Back at the rental house we dragged all of our luggage and gear inside as if we were staying for at least a month, maybe two. It felt good to be in the quaint digs surrounded by friends preparing for a big ride, just like the old days. Everyone agreed that it would be best to carry all the essentials to survive a night out. We really had no clue whether the ride would take 7 or 27 hours, but we knew that it was best to plan for the latter. Warm sleeping bags, plenty of layers, extra wool socks, fire starters, emergency rations, lights and so forth found their respective homes on our bikes. Thankfully, the forecast called for mild winter temps just below freezing, but the wind would make it feel much cooler.

Being sponsored by one the premier winter cycling brands changed the discussion from how we would stay comfortable to what would keep us comfortable. 45NRTH offers a litany of fat tires and soft goods that make such an adventure less ominous. Many of us elected to go with pogies on the handlebars as an extra layer of protection between our hands and the wicked wind. The consensus on boots was the Wölvhammer (I personally opted for the leather Redwing version, which I find extremely comfortable). Naughtvind shell pants and base layer bottoms would keep our biscuits warm. Many of us opted for team-issue jackets of one vintage or another, along with wool t-shirts of various sleeve lengths up top. Heavy wool socks and either Sturmfist 4 or 5 gloves would keep the digits toasty. I personally opted for the Greazy hat due to my lack of follicles, while others chose the Stavanger. We’d deploy various neck gaiters as needed.

One unanimous decision was studded tires. With the beach frozen and slick in spots from heavy waves and cold temps it would be foolish to set out without them, and we laughed at the idea of a time when such tires weren’t an option. I opted for 27.5” Dillinger 4s custom-studded with XL Concave studs while others in our party ran Dillinger 5s.

To save ourselves an even earlier wakeup than already necessary, we nestled the bikes and gear into our van the night before the ride. Daylight happened to be a precious commodity with the winter solstice mere days away, and we wanted every second of it to enjoy the peaceful beauty!

Alarms rang, coffee was brewed, and we filled our gullets with all the food they could take. In the darkness I slowly brought the van up to speed on empty roads, making sure my alertness matched the rate at which we travelled. As dawn arrived, so did our vessel in the port of the Great Lakes Shipwreck Museum. Naturally, you can’t begin an adventure without some well-rehearsed photos of the fearless travelers about to set forth. Our dog, Beau, found it quite delightful to romp around unimpeded as we busily made final preparations. Then all of a sudden, we were off and rolling our way along the foot path to the beach.

The sand was very firm and made for easy pedaling down the first stretch. We looked at one another, smiling in disbelief that we were actually doing the thing. The weather looked to be fair all day, and to top it off, a mild tailwind urged us onward into the unknown. It wasn’t long before we hit our first obstacle: vacation home “rock gardens” armoring the shoreline against mother nature. The rocks are more or less stacked as vertically as gravity will allow, and thanks to the storm, they were encased in crystal-clear ice, making them that much more dangerous. After a quick trial followed by some error we retreated to the last spot on the beach where we could bushwhack into a small camp road just hundreds of feet from the shore. A short detour on the camp road took us around the obstruction and once again we were at full mast and cruising along. 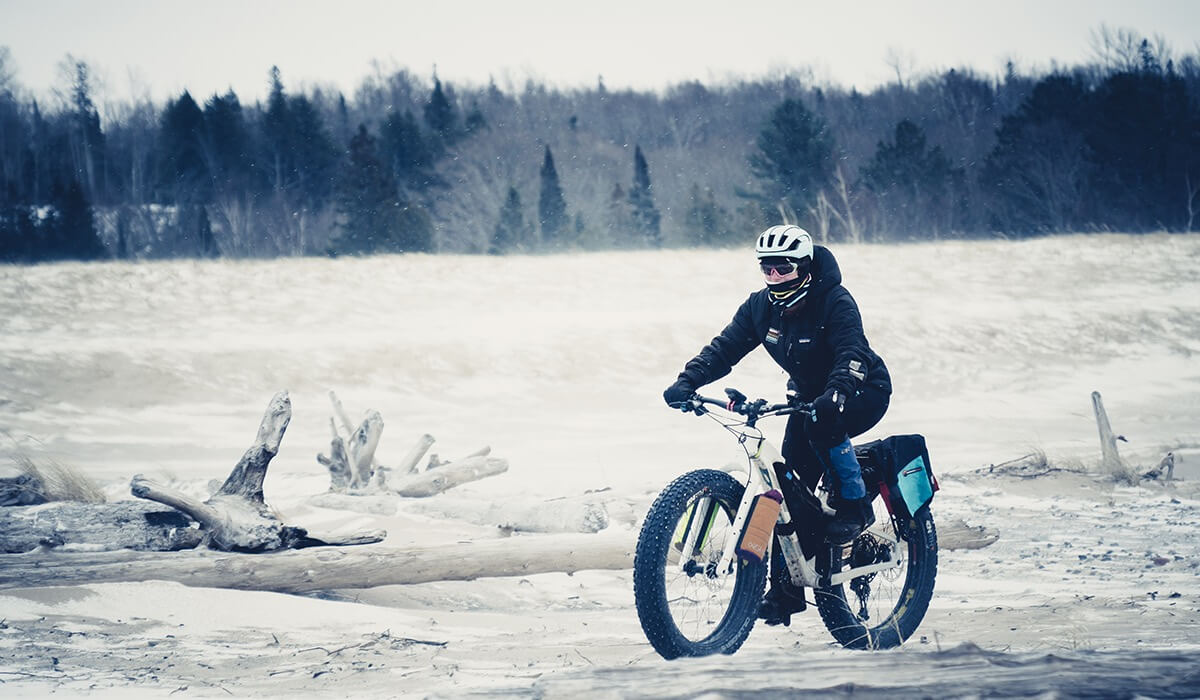 The downed trees created fun obstacles to navigate, their root balls covered in icicles glimmering in the daylight. On occasion the tangled mess of timber called for short portages, but we made smooth progress for quite a while. In some places, the beach was wide enough for us to fall into formation, and the noise created by our studded tires was reminiscent of the droning of an airplane. Since this wasn’t a race, we took our time with some swell photo opportunities and prime snacking locations.

We were careful to avoid getting wet as we steadily met creeks and rivulets emptying their contents into the Great Lake. Thankfully, our well-equipped feet stayed comfy and dry despite periodic soakings as pedals dipped gingerly into the flow. Near Vermilion Point Preserve we encountered beautiful formations of layered stone frozen like mortared bricks, created by wave erosion. These strange natural structures had an extreme overhang, as if they were waves of rock and sand about to crash down. A prime spot to take stock, enjoy some nutrition and muse about our good fortune.

Not long after the break we arrived at Crisp Point lighthouse, the first major landmark of the journey. The weather-beaten structure showed what years of Lake Superior’s wrath can do to human creations. One by one, burritos emerged from pockets and bike bags, and we celebrated having covered 15 miles of the trek in a bit over two hours. The pace was promising and at this rate we may make it back to town with ample time for beverages at the Dunes Saloon! Several miles further on, we encountered our first tricky portage spot. Some chose to brave the hub-deep water crossing while others elected to clamber across thrashed timbers. We formed an assembly line of sorts to help usher the laden bikes across so that we humans could navigate the log crossing safely.

At the 20-mile mark we encountered our first known bypass section around the Little Lake Harbor of Refuge. The low lake level was painfully obvious — had we felt inclined, we could have stripped boots and pants to wade across, but that was less than ideal for the shorter members of our group. Admittedly it felt good to get a break from the steady wind as we ventured inland on two-track and frozen roads. We bore witness to the ravages of the 2012 Duck Lake fire, which burned in excess of 20,000 acres of forest. We plodded along through the burned zone looking for the first opportunity to return to the beach, but a large cliff face proved challenging. Finally, we found an amiable chute and playfully skidded down the dune.

Arriving at the Two Hearted River 25 miles into the ride at just past 1 pm, we had a debate on our hands. A well-stacked pile of firewood beckoned us to start a small blaze, sit down, and enjoy our lunch in its warm glow. However, the limited daylight was a valuable commodity not to be squandered. A leeward dune provided ample shelter to adjust layers, enjoy some food and our precious cargo of Bell’s Brewery Two Hearted ales. We had packed these 12-ounce morale boosters for just such an occasion, as it only seemed proper to toast our adventure at their namesake location. I could feel the warm fuzziness of the IPA working its way into my bloodstream and a smile emerged. How fortunate were we to be enjoying this adventure!

Lake-effect snow was slowly blanketing the beach and adding to the ambiance. The changing of the weather didn’t just come with snow; the wind began to turn from northeast to northwest. At any given time in Michigan, a favorable wind can stealthily shift to one that is less than ideal. I could feel the stinging on my face and tried to protect exposed skin. Having been outside already for several hours, our bodies had become accustomed to the cold, which makes the possibility of frostnip greater.

At times the beach seemed to go on forever, with the vanishing point alluding to just more beach. The real work had begun, as our speed slowed and we opened the vents on our garments to prevent perspiration buildup. Nearing Deer Park, a small outpost along the way, we encountered friendly faces. Jenny and Beau had coincidentally popped out onto the beach from a nearby road to see if perhaps they might find our tracks, but instead found our reddened faces. A brief greeting and acknowledgement that things were going well is all we provided.

Not much further along we encountered an unfamiliar face hunting for agates on the battered coast. The route didn’t look promising, as there were no fewer than twenty downed trees lying well into the building waves. The man nodded then spoke, “don’t think you’ll be going that way today.” I solemnly nodded in agreement and bid adieu. The troops turned around and granny-geared up a steep path to the nearest road. Once atop the cliff we discussed our options. An unstable cliff edge provided a view telling us we made the right choice and informed us that not too much farther west we could once again pedal the frozen sand. We bobbed and weaved along a trail, making our way back towards the water’s edge and finishing with a dune descent for thrill.

Six hours into the journey, we had just shy of 20 miles to cover before returning safely to the harbor town of Grand Marais. Our speed had slowed considerably in the building wind, and the daylight began to wane as it was one of the shortest days of the year. We arrived at the Blind Sucker River to find it flowing considerably. Fording it by bike was not an option, and the best thing we could do was scout along the bank to see what might present itself. We made out a clear sign of human intervention just up the way, a new bridge. Thanks to the fine folks of the NCT for installing this structure that made our day much easier. 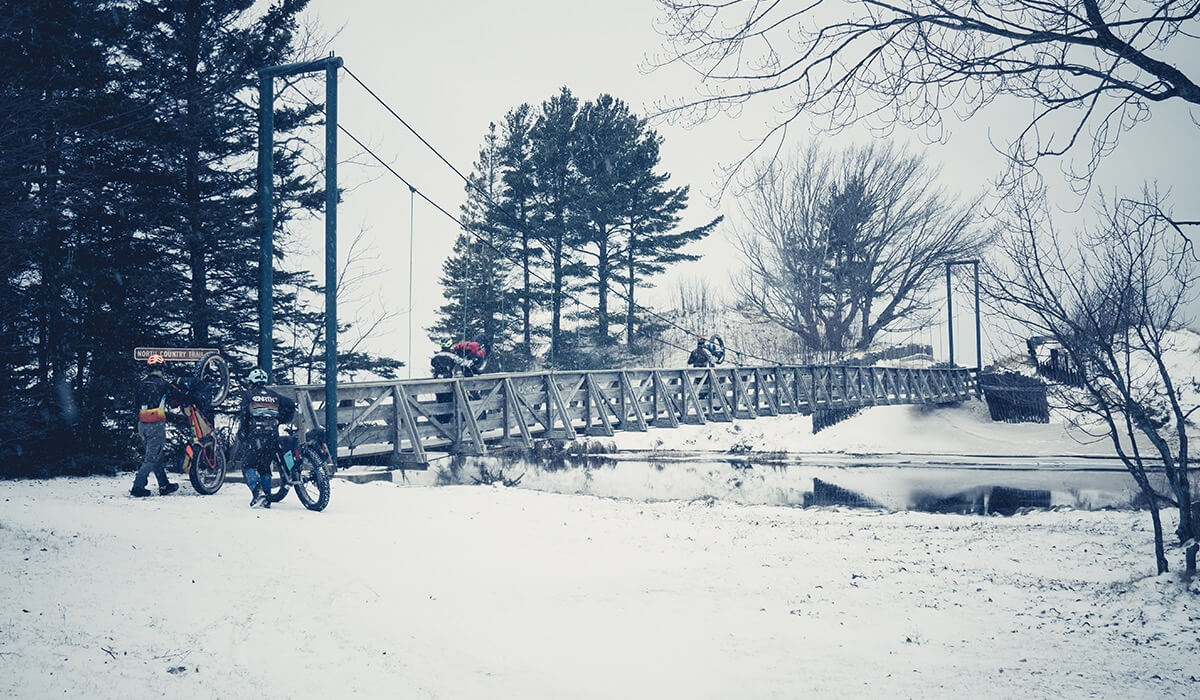 How will the crew fare for the rest of the journey? Read Part 3 here.