The miles came more slowly, and the chatter became less frequent. Our frozen sand highway had degraded into a rock- and timber-strewn path that further hampered our progress. It became that time in the ride when you just keep pedaling and stop thinking so much about anything else. Progress was valued and hard-earned, making it that much sweeter. Despite the tough going, our spirits remained high, and I can’t say that anyone seemed even a tad bit miffed. This is where choosing your crew carefully pays dividends, as it only takes one bad apple to sour the juice.

As we began to tire, it became even more important to eat and hydrate regularly. It’s all too easy to become too fatigued and lazy to take care of yourself on these adventures. That’s when you know it’s time to pay attention and stay focused. 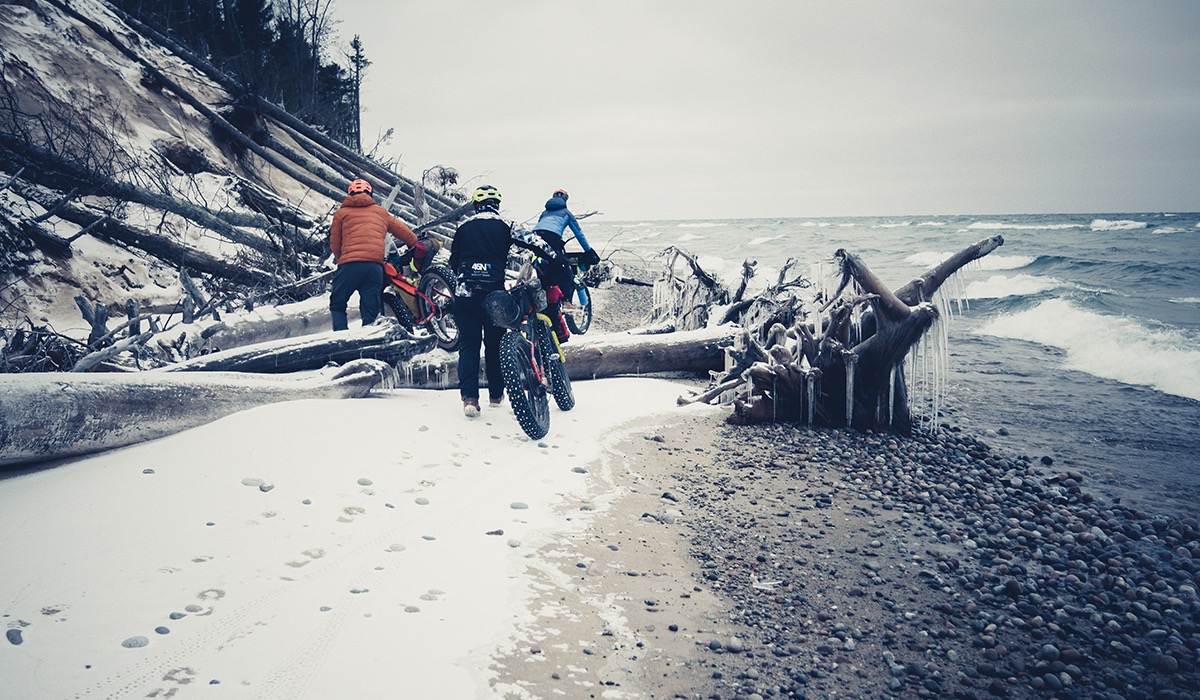 Our next stop was in a stand of young pine trees for shelter from the wind to adjust layers, feed ourselves, and just relax a bit. Wandering a hundred feet into this stunted forest, we could finally hear each other without going, “What?!?!”. We had covered 45 miles and were at the 7.5-hour mark. It wouldn’t be long before darkness fell and colder temperatures set in.

Once we emerged from the shelter of the forest, we quickly got back to pedaling. Movement created warmth and that made me more comfortable. I had finally sweated enough into my gloves that they no longer provided warmth, despite fresh chemical warmers. We were less than 10 miles away from port, but I knew better than to let frozen fingers languish. Despite the annoyance, I dug my spare set of gloves out of my seat pack and was instantly rewarded with dry and comfortable hands. We all agreed that we would rather carry way too much extra warm gear and not need it than be hard-up.

Rounding the grand curvature of the beach revealed a very steep cliff face with little beach to utilize. The wind was whipping the waves into a fury, and timing was key to a safe passage. A large snag of red pines, once standing proud upon the 80-foot cliff, lay between the steep cliff and crashing waves. Our options weren’t great, and I elected to test out the path closest to the water. We had developed a good technique of timing the waves when avoiding obstacles at the water’s edge, but this time I miscalculated. Straddling two ice-covered logs, I ran out of room to work, and my heavy rig wasn’t helping. I dunked one boot in the water in an effort to extricate myself — fortunately, they are fine boots indeed, and thus my foot remained dry. After some less-than-impressive acrobatic moves, I was able to free myself and enjoyed a moment on the other side counting my lucky stars. The others noted my misfortune and decided to carve a path through the tangle.

The terrain that followed wasn’t much more favorable, however. Mounds of rounded stone skittered beneath our studded tires, providing a tenuous surface at best. Just as I drifted closer to the water’s edge in search of better terrain, Geshel took a hard tumble. The stones were not only round and smooth, but also covered in a glossy layer of ice from wave spray. Being the tough person that he is, I heard Geshel call out, “I’m fine” before he even fully hit the deck. Once he righted himself, we quickly turned to the others to inform them of the hidden trap. Everyone was tired and it was getting dark. No time to lose focus now, especially since we could see the tantalizing glow of high-pressure sodium lamps in the distance. So close yet so far.

It was now pitch-black with light snow illuminated in the beams of our lights. One final and major hurdle stood between us and delicious chili: the Sucker River. We knew from our recon ride that there was no way that we wouldn’t get wet crossing it. We discussed options and agreed that we would break from the usual code of not getting our gear wet so we could cross quickly and dash to the finish. With the river mouth obscured in the darkness and dunes, it took some work to locate the proper confluence of the river and lake. It wasn’t any more appealing in the dark than it had been on Friday, and we hesitated. Was it better to cross a bit up the river or go out into the unknown of the sandbar hoping there were no channels? While we were close to safety, it was still risky business with the strong current. There was nothing to prevent someone from being sucked out into the lake via rip current if they faltered and got washed out by the strong river flow.

I said something along the lines of, “What the hell…” and went for it. According to eyewitness accounts, I made it a fair distance before the soft sand sucked my wheels to a halt. I stood there, listing to the side in slow motion, before taking the plunge into the not-so-deep water. Water and sand filled my pogies, gloves, boots, and sleeves. I did what any normal person would do: I ran for the shore! I could feel the sand sucking at my heavy boots as I lurched forward, but the warm thoughts of chili and beer made me a man on a mission. Safely on the other side, I shouted out something lame like, “That wasn’t so bad” and suggested the rest of the group follow roughly the same path. I was kind enough to partially blind them with my headlamp as I shouted pointless instructions. Everyone made it safe and sound to the other side.

We made our slow-motion dash to the finish, sights set on getting the hell out of our wet clothes and into warm showers. We nonchalantly plowed through the creek crossing from the recon ride, which we so hesitantly crossed the first time (Who cares? We’re already soaked). Rounding the bay, we could see Bayshore Park and the invisible finish line. After a quick survey, we determined that no one was in peril, and it was prudent to snap a few blurry group photos. Looking at those photos now, I can feel the exhausted-yet-satisfied grin on my face.

What a journey it had been: after 54 miles and some 9 hours of rugged adventure, there we were in the safety of port. The short jaunt up to the rental cottage was a blur, and soon we were emptying the contents of our boots onto floor mats indoors. Beau raised a curious eye at our arrival but seemed none too impressed as he hoarded the blankets on Brian’s futon bed. The smell of chili cooking filled the dimly lit house, and soon stories of our adventure began to pour out of us just as the lake water had come from our boots. 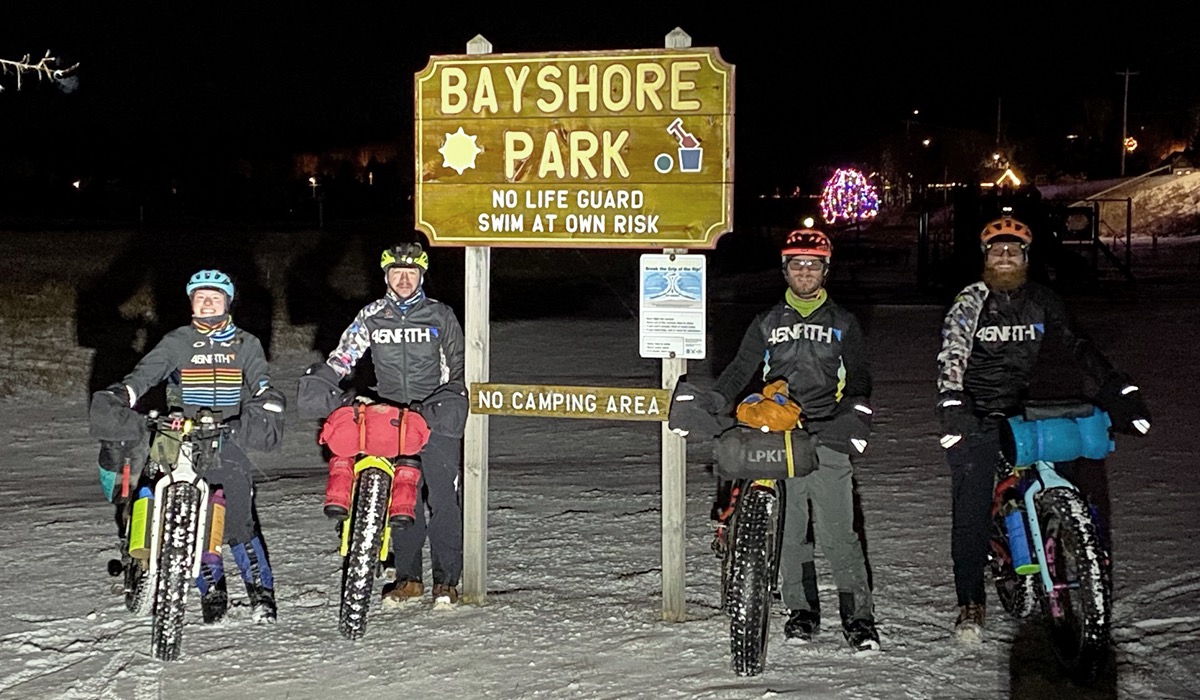