Here in the Tetons, winter is long. The length of winter varies by year, but it is not uncommon to be riding fat bikes on snow from November until the end of April, which ends up being nearly half the year. This has created a strong fat bike culture in the Tetons and contributed to the stoke and reputation of Fat Pursuit, a winter bike race just north of the Tetons. But before I share more about that and why I decided to sign up for Fat Pursuit (my first winter fat bike race), a bit about myself. For context.

I’m a professional mountain biker. Specifically, I race long distances, sometimes for multiple days, and always on trail. I love riding on trail. I also love going fast. I view riding on roads as a way to get from one trail to the next, when viable trails are not available. I have great respect and admiration for gravel riders and those who thrive in road ultras, but I have learned that I prefer to be in more remote places, love the engagement of technical riding, and do not enjoy quietly grinding along.

I also love skiing. Powder skiing and moving in snow-covered mountains have been my loves since long before bikes took over my life. When I relocated to the Tetons as a professional cyclist, I saw winter as a great opportunity to balance my life and training with more time on skis. I also got a fat bike, because five months is a long time to not ride. I quickly realized that when the skiing isn’t very great, the fat biking is fantastic. And the more I explored the places I could ride my fat bike, the more I heard about Fat Pursuit. 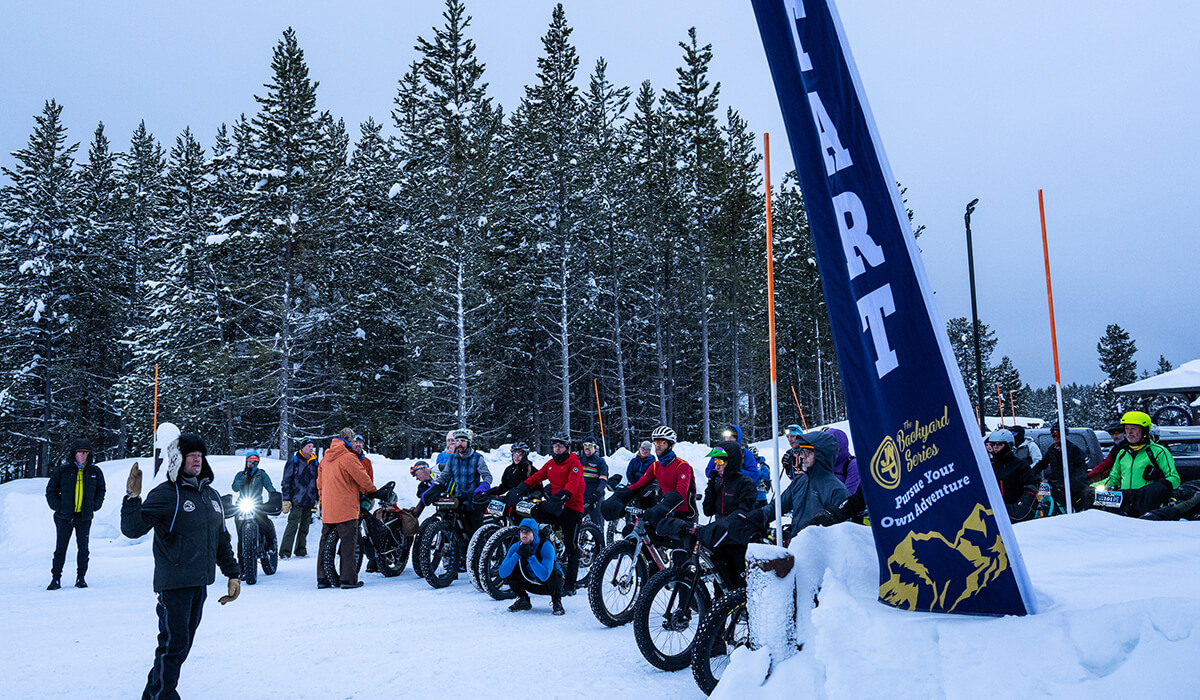 For a couple years, I encouraged friends who took on the challenge of the 200k or 60k distances, all while joking that the skiing was too good for me to drive up to Island Park for the race. Secretly, I didn’t think I would enjoy it that much, that fat bike racing wouldn’t align with how and why I love to ride (and race) my bike.

Finally, this year’s slow start to winter led to more riding than skiing, and I started to wonder what I would think of racing my fat bike. The hype for the race was building in the community, and I registered on a whim, ultimately choosing to ease into the discipline in the 60k race before tackling the multi-day event that is the 200k.

Snow fell steadily in the weeks leading into the race, which wasn’t a surprise — every year is flavored by winter weather. The race director, Jay Petervary, says some years are snow years, some years are cold years. This year turned out to be the wind year. But the race is intended to be a winter challenge, and it just wouldn’t be that without weather. For me, the winter challenge element was one of the most intriguing. I wondered if my expeditionary winter skiing experience would transfer smoothly to winter fat bike racing.

I packed my bike the night before, opting to bring all the recommended gear, including a bivy, shell jacket, puffy jacket, ample water capacity, fire starter, spare gloves and hat, mini first aid and repair kits, and more than enough food for my slower anticipated time. Strong winds had blown out the snow storms the night before, during the middle of the 200k, and I woke up on the morning of my race to cold, quiet air. 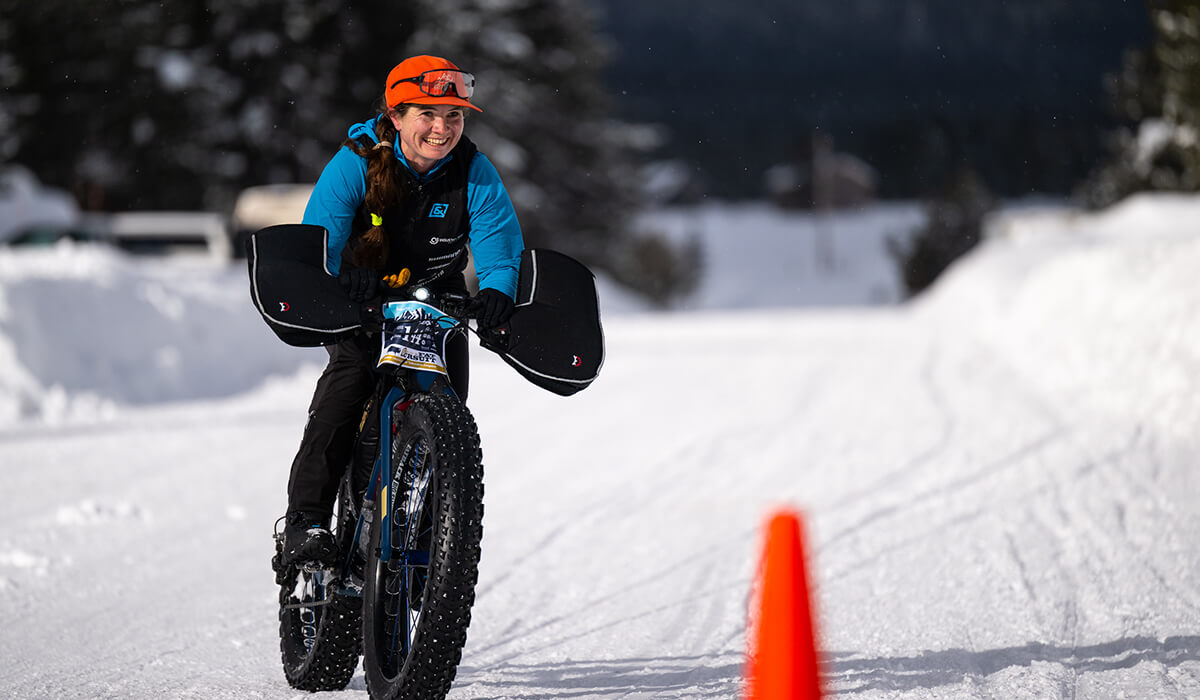 I lined up at the start among a group of other racers. Folks nervously added and let out air from their tires, removed layers, turned on their flashing rear lights, and breathed out cold air. I noticed my rear tire was a little lower than when I left the house, and I quickly added air until it was firm. The race gun went off, and we all pushed forward. A roar of the collective sound of wide tires churning over cold, crunchy snow followed me across the first meadow. Feeling excited and energetic, I pedaled along, following the snowmobile track that aligned with the line on my GPS. A couple guys followed me, and we swapped leads as we alternated finding the firmest snow in the track.

Then, the two lead guys started to pull away from me. I pushed on, concerned that I felt like I was exerting more effort than they were to go the speed we were moving. I glanced down and saw my rear tire had lost the air I had added at the start, just 15 minutes prior. I pulled over to add air with my pump. By the time I had topped off, a half-dozen or so riders had passed me. I rejoined the group and continued on, reminding myself that there was still a lot of race left and not to blow myself up just trying to make up time. I pedaled steadily, slowly closing the gap with the time I had lost. Then my speed slowed as my legs pressed into the pedals, and once again I was on the side of the trail adding air. More riders passed, all cheerful and having a great time. The sun was out and all the new snow sparkled around us. I smiled back. It was a beautiful day. I added a bit of extra air as the track was firm and I really didn’t want to stop every ten minutes. Finding the firmest part of the trail, I pedaled on, closing gaps and enjoying getting a moment to say hi to the racers around me. Everyone seemed to be having a great time. 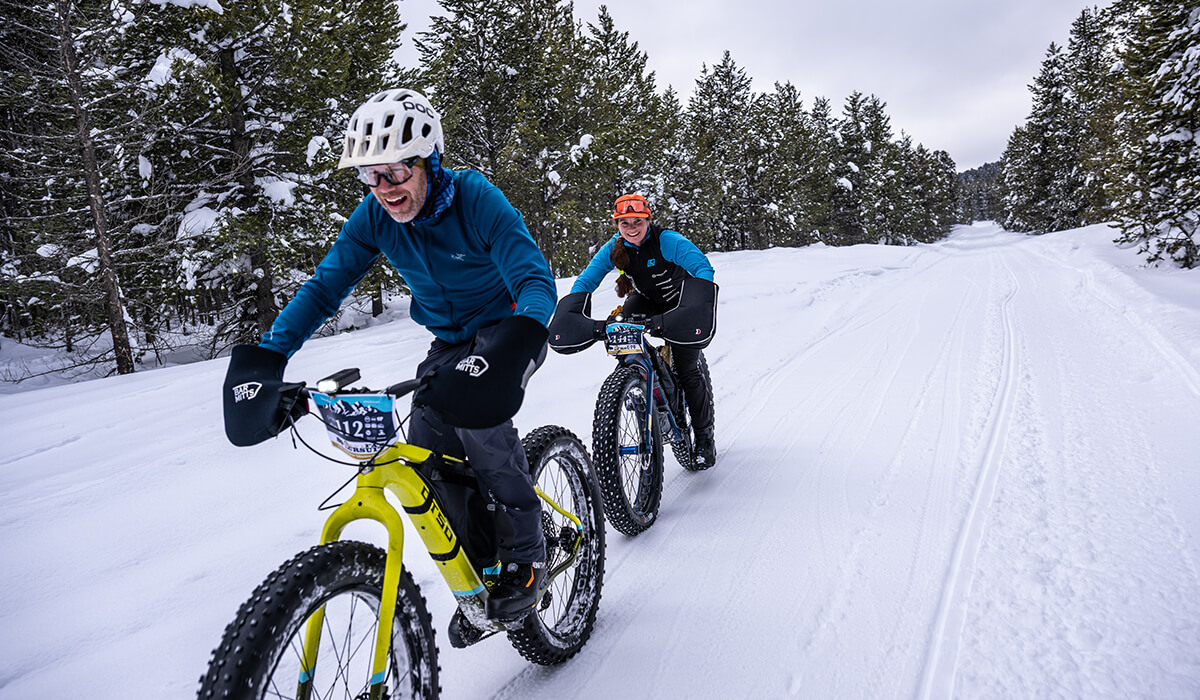 I settled into line with a guy who shared that this was also his first fat bike race. We chatted about our impressions thus far and marveled at how fast we were moving. I told him about the conditions and speeds that the 200k racers were enduring and we both agreed that our race was a good test for whether or not the long one would be on our calendars next year. We cruised by the first aid station, and I was shocked to realized we had traveled 13 miles in just over an hour. We were flying.

The 60k course profile didn’t look particularly engaging on the map when I first looked at it; it had a few short climbs and a general trend in elevation gain and descent, but we didn’t go over any mountains like the 200k. I was pleasantly surprised to find the terrain really engaging and captivating. We traversed meadows, contoured along foothills, and rolled through the forest. The snow conditions — ever so slightly variable in aspect, elevation, and grooming status — kept me focused on riding the smoothest, firmest line and finding the right balance of cadence, power, stillness, and finesse to keep my bike moving straight and efficiently. Before I knew it, we passed the second aid station and had just ten more miles to go. I had ridden this trail before and knew that it had a stair-stepped climb with some punchy pitches until it flattened out across a vast field to the finish. I ate two gels that I had warming in my pocket, took a couple sips of water, then focused on pushing just enough that it was a little uncomfortable, all while still seeking the firm edge and keeping my bike straight and fast. 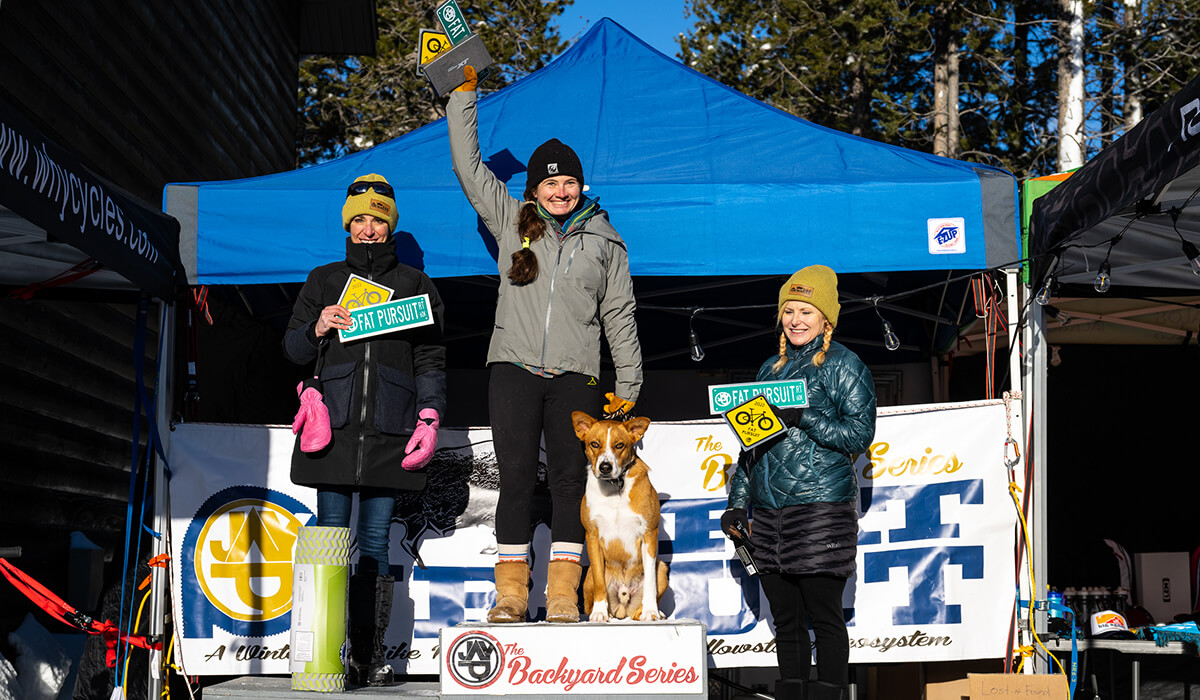 Approaching the top of the climb, I looked back and saw that my new friend had fallen back after sliding out in a ski rut. Turning across the field, the strongest wind of the day hit head-on, and the final two miles were the slowest of the ride. I churned along into the headwind and reminded myself that this is part of racing in winter and great practice for my next fat bike race. Crossing the finish line, I was already hooked on the winter racing experience.

As someone who loves pushing myself on my bike, loves riding trails, really enjoys the camaraderie of racing, and loves moving in the mountains in winter, fat bike racing turned out to be a great fit for me. I realize I won’t always go fast when racing on snow, and I will most certainly go slowly when I tackle the 200k Fat Pursuit. But I also know there is a lot of magic to see in the winter world that is best observed at a slower pace. Fat bike races feel like an invitation to go ride somewhere new and offer a unique experience with like-minded cyclists. Because snow and weather conditions are never quite the same, fat bike races are like snowflakes: every single one is unique.

Kait Boyle is a world-champion, ultra-endurance cyclist. She lives in Victor, Idaho where the mountain seasons dictate how and where she rides her bike. Follow Kait