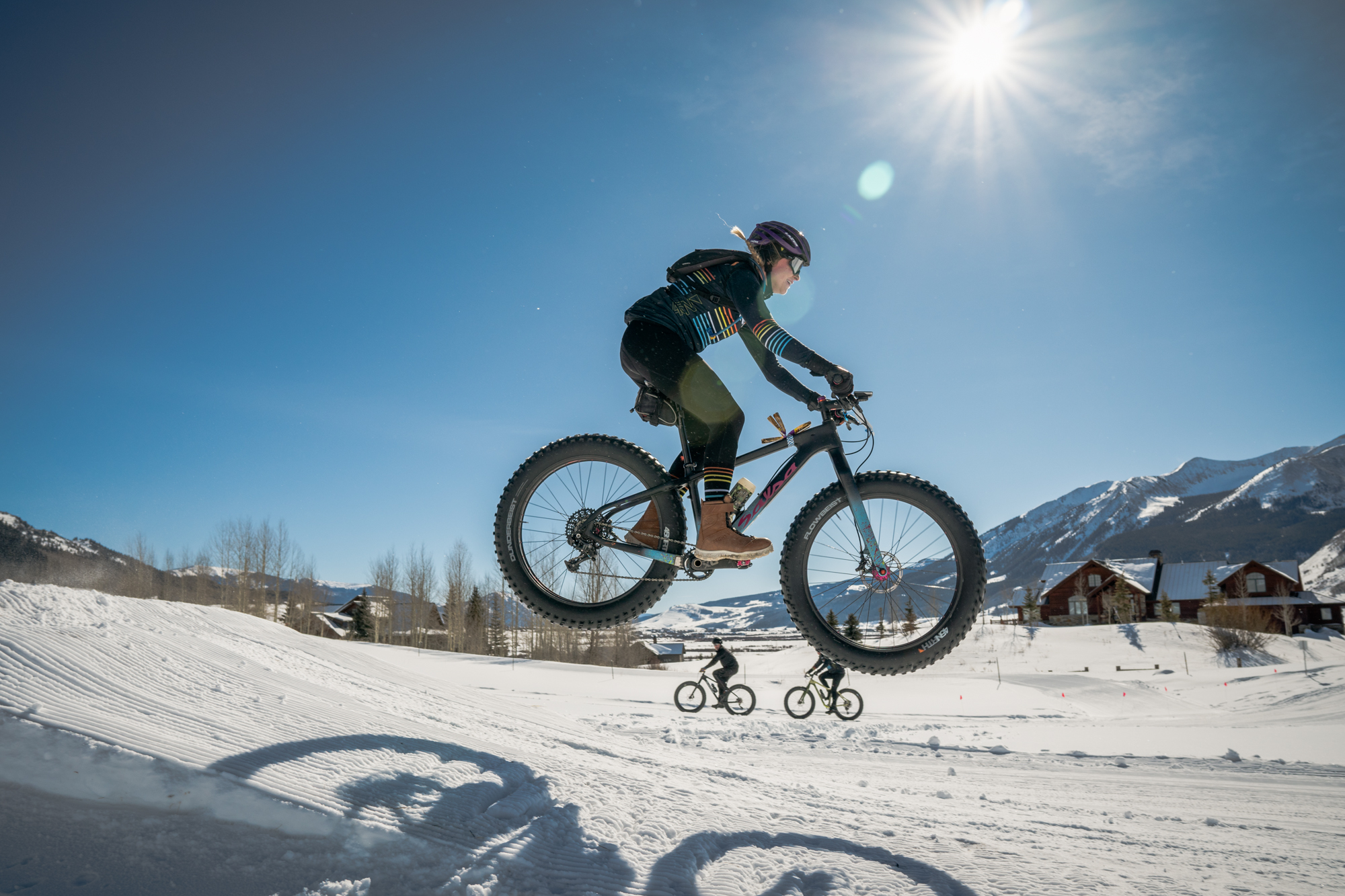 Three of us arrived on Wednesday evening in time to check into our rental house near town and to catch the tail end of the Kick-Off Party at Brick Oven Pizzeria & Pub. All of us had registered for the 5 lap Saturday Fat Bike World Championship race. I had also committed to racing Thursday’s North Village Classic as a co-ed duo with our team rider Neil Beltchenko, a Crested Butte local, and through a little peer pressure, our other 2 staff had registered themselves together on a competing team in the male duo category. We each had a complimentary beer from Upslope Brewing Company, a brewery out of Boulder, CO that offered free beer to all participants throughout the event, before heading back to the house to get organized for Thursday’s festivities.

Thursday morning arrived, and the 45NRTH crew headed up the mountain to North Village to get set up for the fun race. They had categories for individuals, teams of 2, and teams of 4, and we watched all of the participants roll in. We missed the memo, and were some of the few that weren’t dressed in costume! The race kicked off with a Le Mans start, where you had to run to your bike to start the race. I was lucky to sit out the run, since only 1 rider per team had to ride at any given time. As the riders mounted their fat bikes and took off on the course, you could watch them spread out along the full mountain-bordered 1.5 mile loop, though at times the riders were so far away all you could make out were little dots moving along the horizon. The race course started out pretty hard packed, and held up pretty well throughout the race, save one steep little kicker of a hill and a few corners that got a little chewed up. Cheers to the groomers! 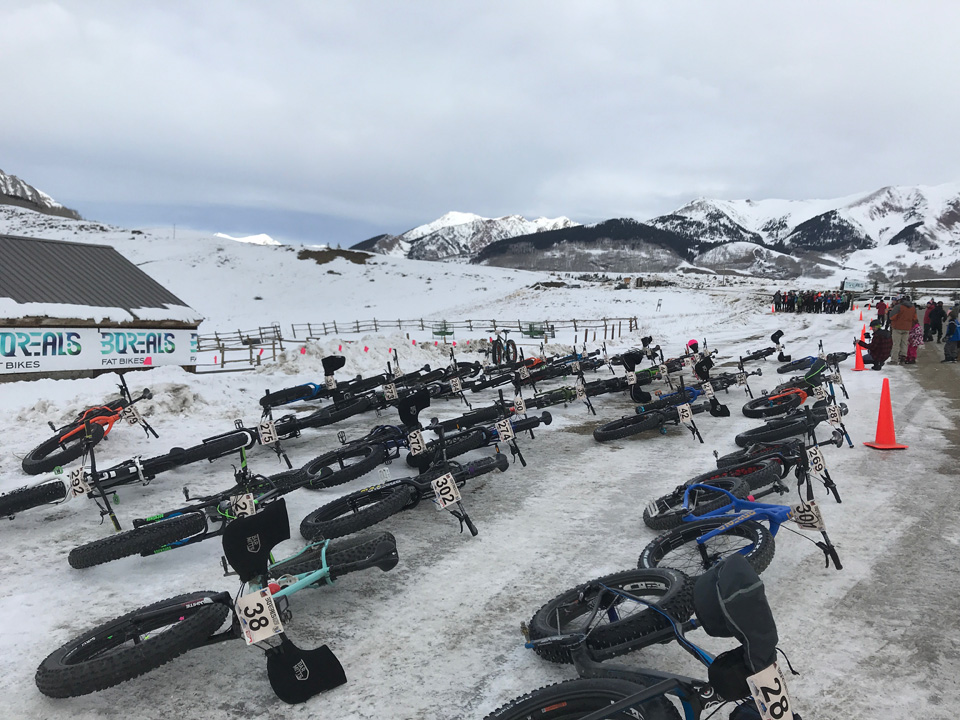 Just before the Le Mans start to the North Village Classic.

Between the race and the awards, Upslope was slinging those free beers and the organizers were serving up burgers and brats. After a few conversations with fellow participants, we learned quickly that other folks had traveled not only from Minnesota as we had, but from places further away like Florida, New Mexico, California, Oklahoma, and even England! Neil & my team landed first place for the co-ed duo category, and our other 45NRTH team landed second for male duo! The Thursday After Party was at Montanya Distillers, where there was a live band playing, and all participants received a coupon for a complimentary cocktail. Montanya is a rum distillery, and had no shortage of imaginative rum cocktails! 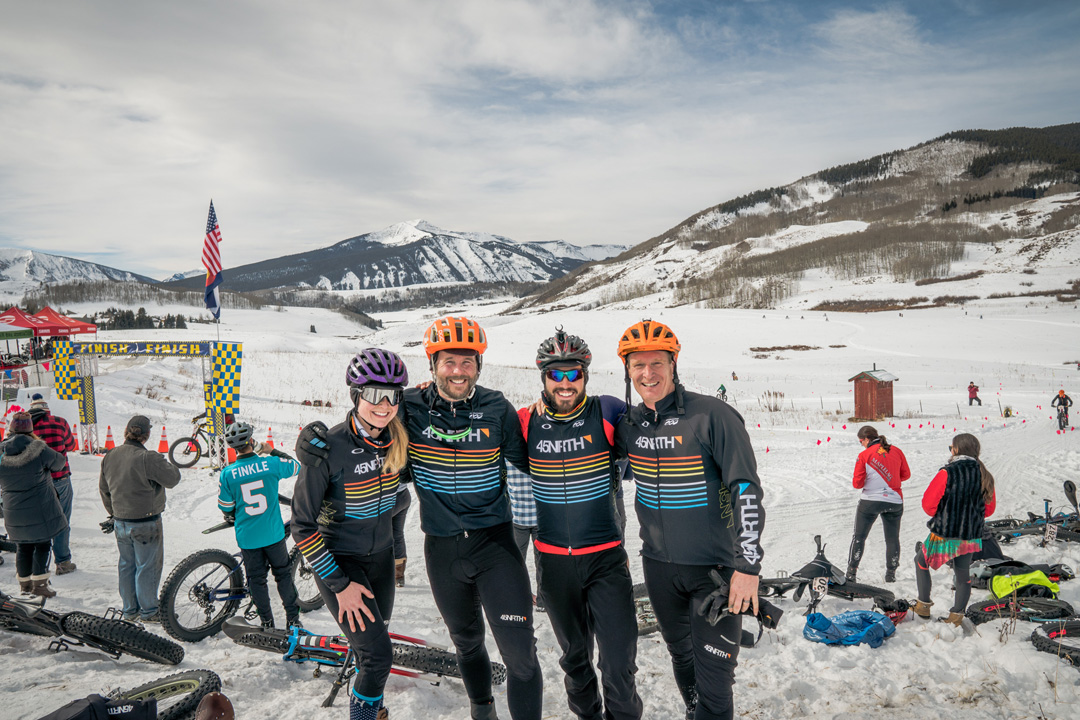 Here was our crew on Thursday for the North Village Classic! (Photo Credit: Neil Beltchenko)

Friday was a demo day, and there were a variety of different fat bikes for folks to try from Otso and Borealis, and Big Al’s Bicycle Heaven brought some of their demo fleet and added some Rocky Mountain bikes to the mix. It had snowed 3-6 inches the night before, so the North Village trail was a little looser than it was for the Thursday races. We recommended tire pressures of no higher than 4 psi, and our Flowbeist and Dunderbeist tires handled the choppy snow really well! There was no Friday after party, so our crew made dinner at home and relaxed a bit. 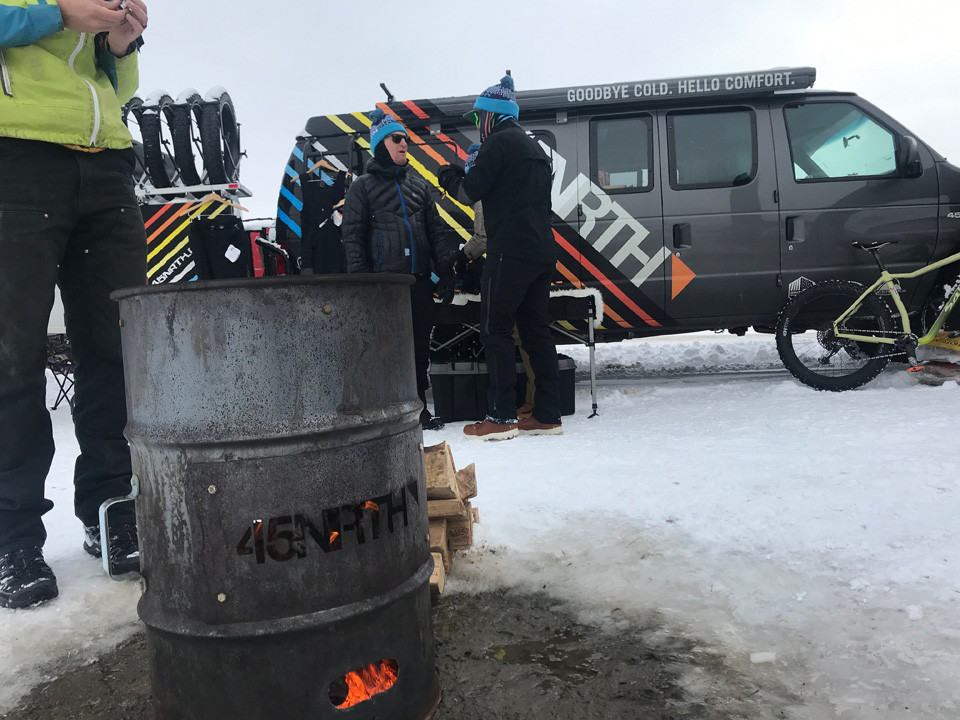 As we always say: Keep your Biscuit Warm!

We rolled our big ol’ #beistmobile down to the groomed snow and set up for the big championship race. It was below 0F when we loaded in, but the sun was glaring and the temperature rose pretty quickly. The 6 mile course was immaculately groomed: ribbon-like and wide throughout, beautiful corduroy, and a [sweet] jump next to the aid station about halfway through each lap. We all lined up together, with the 5-lappers ahead of the 3-lappers. Again, there was no shortage of costumes toeing the start line, ranging from an owl and a crew of barbarians, to a man in a three-piece suit. 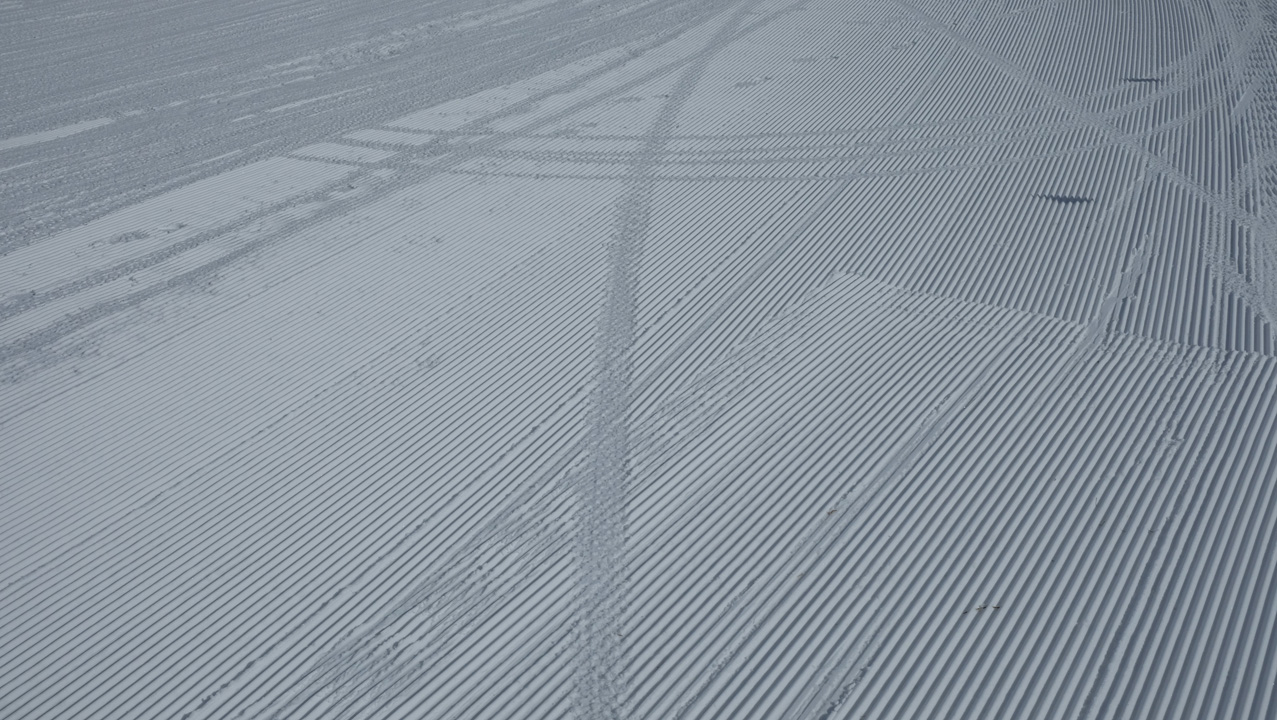 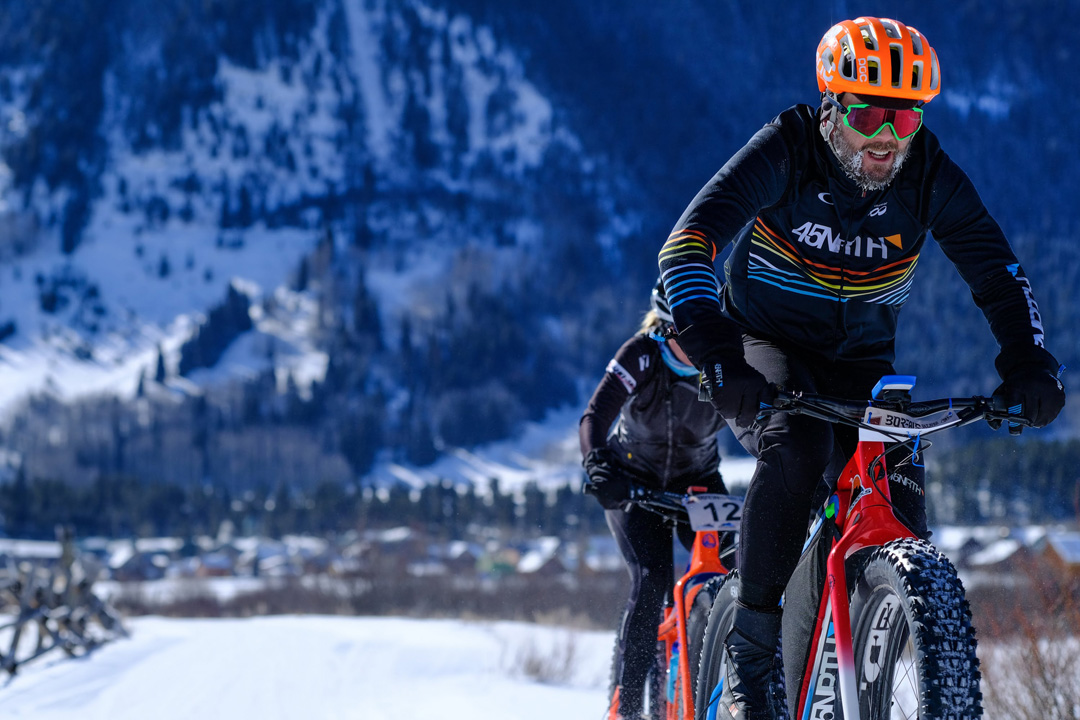 Like I said, there was a [sweet] jump on the course! (Photo Credit: Neil Beltchenko)

The 30 miles went by pretty quickly, and the overall winner, Tony Baca, 26, from the Longmont, CO, averaged just shy of 17mph! The winner of the women’s class was Ashley Carelock, 35, from Dolores, CO, who averaged 15mph! You can find the full results here.

Later that evening, the after party and final awards ceremony was held up the mountain at Avalanche Bar & Grill as a private party with more complimentary Upslope brews. The energy during and after the race was infectious, and you could hear everyone around you talking about their day in the saddle. We had to take off early on Sunday, but if you stayed you could do lifts with your bike and race downhill. We’re pretty bummed to miss out, and are already scheming for next year!