What I’ve come to most appreciate about being part of the 45NRTH team is that it feels like an extended family. Some of us cross paths during the warmer months on occasion, but once winter comes it’s like a family reunion every race weekend.

We rent a house for race weekend, chatter back and forth about travel plans and then meet up a day or two before the race. We cook meals together and sit by the fire catching up on life and speculating on exactly what tires and setup to go with for the race.

Come race day everyone is in their own zone, focused on their unique ritual of preparing food, getting dressed, looking at what others are wearing, changing clothes, obsessing over glove choice, etc. The races are often fun, but the real treat is spending the weekend together.

After race we reconvene at the rental to relive the day’s events, laughing about mistakes made or a funny incident out on the course. Some sneak away to an early slumber while others burn the midnight oil. It’s a good time and I’ve come to love this tradition. 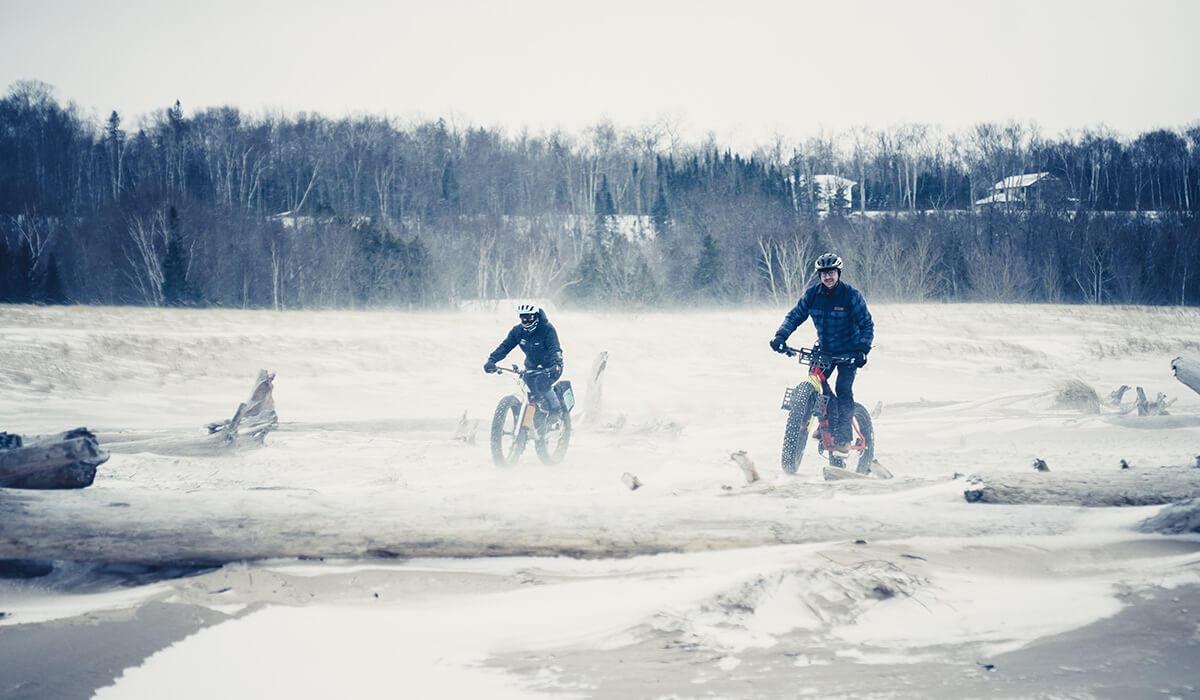 Fast forward to the fall of 2021. Some chattered about what this season might look like and what options we’d have for events and gatherings. I spoke with Steve at 45NRTH about options for our crew. He mentioned that if I had any ideas about rides/adventures that would make for a cool story and photos that he was all ears, but that events were still iffy and they would support however they could remotely.

I keep a mental list of ride and adventure ideas I want to do someday, just waiting for the right time. Some of these ideas are fed by trips I’ve read about, heard other people attempting, or just simply seem like something cool to do. Evan Simula and I began discussing what we could do that would make sense for our local contingent of athletes. Then it hit me! I had read many years ago about some folks bikepacking a chunk of the Lake Superior shoreline between Whitefish Point and Grand Marais in Michigan’s Upper Peninsula. I always had it in my head as more of a summer/fall ride since it’s on the beach and involves potential water crossings, but why not attempt it in the winter when things are frozen and the sand is firmer?

I tossed the idea out to Evan and that spark turned into a flame. We bantered about the timing, the crew, logistics, equipment, and so forth. Once we had a pretty good plan laid out, I took it to Steve at 45NRTH and it was game on. With the green light given, Evan and I assembled the crew: me, Evan, Brian Geshel, Jill Martindale, and Neil Washburn (who was also the photographer — you can thank him for these striking images!). I rented a house in Grand Marais to serve as our base and we began preparing for the trip.

Whitefish Point is a notable spot on the Lake Superior shoreline where the land juts out like a shark fin into the lake’s icy depths. It is home to the Great Lakes Shipwreck Museum and that isn’t by coincidence. The point serves as a bit of a boundary between the open and unpredictable waters to the west and the more protected waters of Whitefish Bay to the southeast. If you pull up a map of the Upper Peninsula and locate Whitefish Point, you’ll notice that there’s not a whole lot going on as far as human population goes. Scroll west on the map a bit and the first town you’ll find is Grand Marais, some 50 miles away.

Prior to settlers arriving in 1860 this section of shoreline was fishing grounds for the native Chippewa. Today the Bay Mills people fish this area as members of the Great Lakes Indian Fish and Wildlife Commission (GLIFWC), an inter-tribal group of Ojibwe bands that manage and regulate treaty commercial fishing on Lake Superior.

Nowadays, the shoreline is a mix of seasonal homes and “outposts” such as Deer Park, but it’s not heavily populated and has a natural feel. Several notable waterways empty into the Great Lake along this stretch of beach, including the Two Hearted River, Blind Sucker River, and Sucker River. These waterways ebb and flow with the rainfall levels and can vary from stifled rivulets to raging torrents.

The beach itself varies from wide stretches with short, windswept dunes to steep cliffs and very little passable land. Recent high water levels eroded and damaged the shoreline. As the waves from storms slowly gnaw away at the exposed land, trees topple over and onto the beach then become entangled like magnificent tumbleweeds.

To protect their homes from nature’s cruel punishment, some owners resort to large piles of rock, steel retaining walls, and other forms of defense.

All of these factors lead to unknown challenges for anyone traversing the shoreline by foot or bike. This isn’t exactly a popular journey to make, so there are little to no reports about what condition the shoreline is in, if there even is a beach in certain areas, and what one might come across should they embark on such an endeavor. Frankly that’s fine by me as it has all the ingredients of an adventure!

Our plan was to stay in Grand Marais for a long weekend in December. With the ride being almost entirely on the shore of Lake Superior, weather would play a crucial role in the success of our trip. Having a long weekend for a travel window gave us some options in case the fickle weather of Northern Michigan decided to wreak havoc.

The week of the trip, a massive weather front moved in from the west, bringing wind gusts upwards of 60 mph, gale warnings, and waves more than 30 feet high. We watched the weather religiously and kept fingers crossed that a travel window would present itself.

Our crew slowly assembled at the designated meet-up spot of Bayshore Park in Grand Marais. We greeted one another giddy with the anticipation of an adventure months in the works, hastily unpacking bikes and gearing up for some shoreline riding. We had done a lot of homework via satellite images and personal accounts, but one of the biggest unknowns was right near town. Since we had the time, we figured it would be best to do some scouting and stretch the legs.

I couldn’t help but grin like a mischievous child getting away with something as we put our first pedal strokes in along the bay. It wasn’t long before we hit a modest creek and plunged forward in foot-deep water, eagerly making headway. High winds still scoured the frozen sand mixing any loose grains with nearby snow drifts caught in the eddy of the shallow dunes.

The Sucker River empties into Lake Superior just east of town. It’s one of the biggest rivers in this stretch of shoreline and we arrived at its mouth to find rapid waters being harshly pummeled by the force of the waves making landfall. It was as if the lake were trying its damnedest to force the river back from whence it came. We stood there analyzing the whole scene and trying to determine the best options. There appeared to be a sand bar at the confluence of the raging waters, but it was too hard to tell if it was a valid option or a fool’s errand. After mulling it over, we figured that if worse came to worst, the crossing is only a couple miles from the warmth of our rental cottage, so we’d make it work. Setting aside the extra time for some successful recon was a huge bonus and got us fired up for the ride that lay ahead. The weather was set to break that evening and in an un-Michigan-like stroke of luck, we might even find ourselves enjoying a rare eastern tailwind to begin our ride! 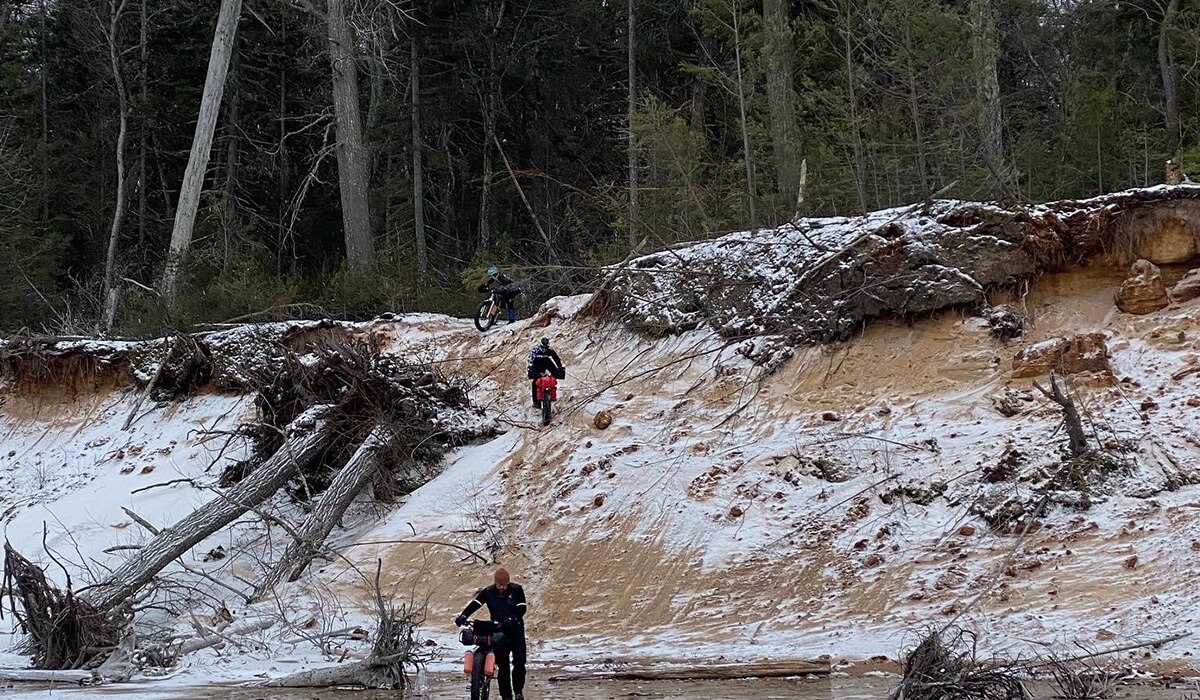